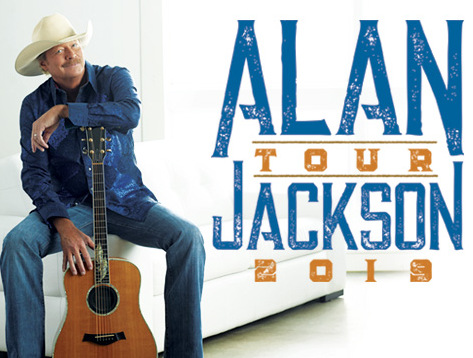 Country Music Hall of Famer Alan Jackson will be hitting the road in 2019, bringing nearly three decades of hits to cities across America! The country music icon will hit the road beginning January 25, headlining arena concerts and amphitheater shows (detailed listing below, with more dates to be added). The three-time CMA Entertainer of the Year will be thrilling audiences far-and-wide as they relive their favorite songs night-after-night in city-after-city.

Tickets and information for all Alan Jackson 2019 Tour dates are available on the Tour Page, where you can find information about Alan, his tour schedule, music and more. Jackson is again teaming up with CID Entertainment to offer fans VIP experiences at many of his 2019 shows.

Alan Jackson’s concerts find the country icon performing hits that have gained him legions of longtime fans, songs that continue to draw new crowds as a younger generation discovers his music. Jackson’s repertoire stands the test of time; it has impacted a field of artists who cite Jackson as an influence. It’s these same songs – many written by Alan – that earned him his place alongside country music’s greatest names and cemented his place in its history with membership in the Country Music Hall of Fame and the Songwriters Hall of Fame. Fans will hear the songs they love from the man who wrote them and made them famous, including his debut hit “Here in The Real World”...signature songs such as “Chattahoochee,” “Drive” and “Gone Country”...party anthems “It’s Five O’Clock Somewhere” and “Good Time”...and many, many more.

The country superstar will be bringing exciting talent on the road with him in 2019. Newcomer William Michael Morgan will be Jackson’s special guest on most shows; hitmaker Randy Houser will play the role on selected dates.

Chart-topping hit “I Met a Girl” put Mississippi native William Michael Morgan on the map, but his talent, music and voice are keeping him there. A timeless sound and honest lyrics landed him a major label record deal at 19, gave him that #1 gold smash, and earned him a Top 5 debut album. A few years older – and hundreds of shows wiser – William Michael’s music embodies the man he’s become: a hard worker and big dreamer, single dad and hopeless romantic, pure country stalwart unafraid to embrace the here and now.

Hitmaker Randy Houser’s vocals have earned raves and his music has made him a staple on country radio over the past decade, as he topped the charts with “How Country Feels," “Runnin’ Outta Moonlight,” "Goodnight Kiss" and “We Went.” Houser is also known for such hits as “Boots On” and his critically- acclaimed powerful delivery of the Top 5 smash and CMA Song of the Year nominated "Like A Cowboy.”

In addition to Morgan and Houser, many of Jackson’s shows will include a brief performance by aspiring singer-songwriters who’ve played AJ’s Good Time Bar, his self-owned honky-tonk on downtown Nashville’s famed “Lower Broadway.” Jackson has a long history of giving new and rising stars their first chances to perform in front of arena-size crowds – artists who’ve been on one of their “first big tours” with Alan include Brad Paisley, LeAnn Rimes, Sara Evans, Chris Young and, more recently, Jon Pardi and Lauren Alaina.

Alan Jackson’s touring history has taken him across America and to places far beyond, and his music has gained him fans around the globe. In 2019, he’ll continue his tradition of “keepin’ it country” for people far and wide as he brings nearly 30 years of hits to a city near you!