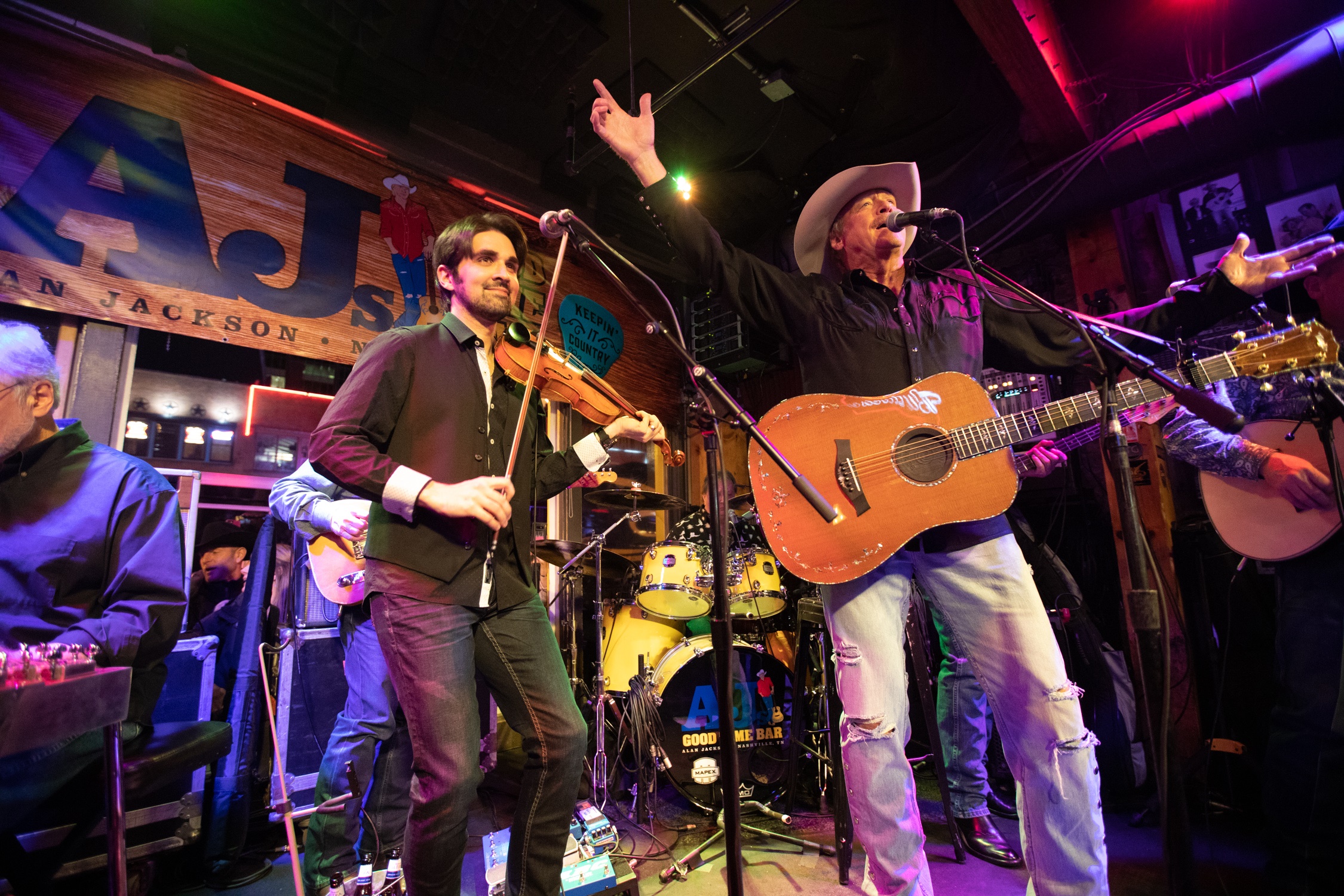 Country giant Alan Jackson must believe in truth in advertising — he showed up at his AJ’s Good Time Bar in downtown Nashville Friday night (January 17), playing a secret show for a few hundred fans and getting back to his honky-tonk roots.

With the bar’s first floor at capacity and a mob of tourists forming around the three tour buses parked outside, Jackson hit the tiny stage at 11:15 p.m., basically tunneling his way through a crush of lucky fans and jumping straight into a loose set of iconic hits, with the timeless “Don’t Rock the Jukebox”leading things off.

Even after a whole day of appearances at the Grand Ole Opry, Jackson’s smoldering baritone was in fine form, and none of the hour-long set seemed like much of an effort — for him or the eight-piece band he somehow crammed on the postage-stamp sized stage. Playing with their backs to open street windows in that famous Broadway style — a simple trait that’s a big part of why the neon-lit strip is so much fun — it was the kind of show that seemed like just as much fun for Jackson as it was for fans … and almost like a throwback to a different era of live music.

“I Don’t Even Know Your Name” and “Pop A Top” rolled out in short order as Jackson hooted and hawed like Bob Wills in between verses, only deciding on each song just before his drummer counted it off. “I hope y’all are having a good time at my Good Time Bar!” he said through that laid-back Georgian smirk, his long frame capped in a crisp cowboy hat.

“Little Bitty” started off with a big ol’ fiddle intro, and suddenly the night felt like “one of the old days” — except for all the smart phones clogging up the view. AJ’s is now just one of many celebrity branded honky tonks on Broadway, but it’s refreshing in simplicity. The first floor, especially, is a throw back to 15 or 20 years ago, modeled more like small town watering hole than NashVegas, with plywood floors, domestic beers and an exclusive focus on country music — one of only a few bars that can honestly say that anymore.

Taking seat as he slowed things down for the haunting “Midnight In Montgomery,” Jackson rolled on through the requisite “Good Time” and had a few laughs as he flubbed the words to “Dixie Highway.” “Chasin’ That Neon Rainbow” found its spiritual home, with Jackson framed in buzzing beer signs all around, and “Summertime Blues” warmed up the chilly January air. “I’m tired of this cold weather,” Jackson said from the stage, jokingly trying to repair the holes in his jeans with the strings that hung around their edges.

The hit maker also shared the forlorn “Everything I Love (Is Killing Me),” taking the sad tunes in moderation, and then cranked things back up for “Mercury Blues” and the harmony-filled “Seven Bridges Road.” By the time he thanked the crowd and finished up with the one-two punch of “Who’s Cheatin’ Who”and “Chattahoochee,” the crowd was awash in the glow of pure-country bliss — and another only-in-Nashville moment entered the history books. Since it was Broadway, the party was far from over, but a “good time” was definitely had.

Jackson’s 2020 tour with Tenille Townes in support is underway now.